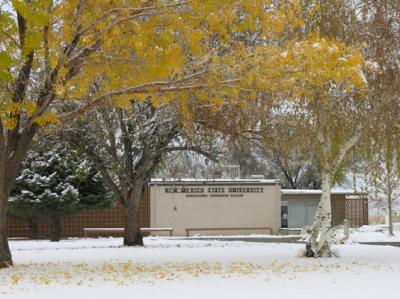 Serving the agricultural needs for the San Juan River basin of northwest New Mexico and the Four Corners region since 1966. The Agricultural Science Center at Farmington consists of 254 acres leased from the Navajo Nation. It is the only agricultural research facility, in the state of New Mexico, that is on the western side of the Continental Divide. The Center is located approximately seven miles southwest of Farmington, (36 degrees 4' N by 108 degrees W) at an elevation of 5,640 ft. 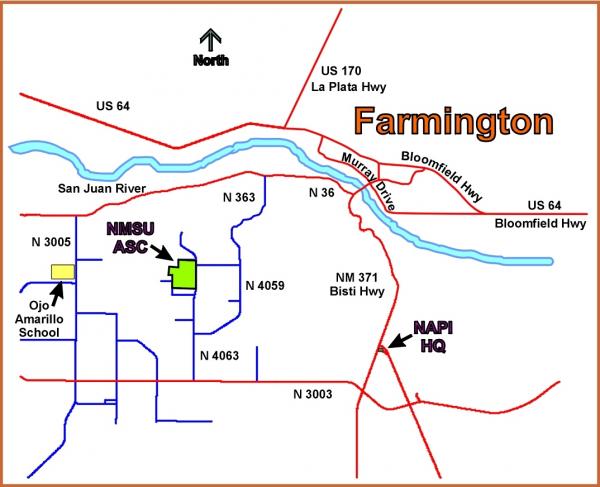 The Center is within a semi-arid environment. According to the Annual Progress Report, the Center's mean annual precipitation is 8.1 inches based on recorded weather data from January 1969 through December 2008. The mean monthly average maximum air temperature is 66.5 degrees and the mean monthly average minimum air temperature is 38.8 degrees. In 2008, the average mean frost-free period was 162.0 days, from May 3 to October 13. There are four soil orders within the Center ranging from sandy loam to loamy sand (59-83% Sand) having a pH of 7.8 (Anderson, 1970).

Of the 254 acres comprising the Agricultural Science Center, 170 acres are under cultivation. Over 100 crops have been grown on the Center, since its inception in 1966. Many crops, which produce well in northwestern New Mexico, are not grown in the area because of market prices at the time of harvest, high distribution costs, personnel unfamiliar with production practices etc. Currently, the research plots are irrigated via center pivots, solid set, side roll and surface drip irrigation systems. Historically, irrigation systems also included flood but it was impractical for the Center's sandy soils.

Historically, research has included crops, such as winter and spring wheat, winter and spring barley, oats, corn, alfalfa and crambe. Dry bean variety and management trials, including row-spacing and management for white mold control, were conducted at the Center. Fertilizer-type/placement trials and herbicide-type/application trials have been carried out with potatoes, corn cereal grain and dry beans, in various rotations.

Water application research includes determining water-use production functions of the primary crops, in the area. This project includes developing and evaluating formulae to predict water application and consumptive-use of crops and turfgrass. An eight-acre drip irrigation system will allow the comparison of consumptive-use and water-use efficiencies of economically important crops under sprinkler and micro irrigation systems.

Since the mid 1960's, average county yields of alfalfa have increased from three to more than five tons per acre; corn has gone from 55 to 140 bushels per acre and wheat from 35 to 90 bushels per acre. Potatoes have become an increasingly important crop. With new acreage being put into production each year, new research initiatives are needed primarily in the areas of high value crops, irrigation management, herbicide use, and soils.

Buildings on the Center include an office and laboratory building with eight offices, conference room, archive library, head house with attached greenhouse. There is a three bedroom residence with attached garage.

The Center has two units available for visiting researcher housing. The mobile trailer has two bedrooms with double occupancy in each room. It also contains two full baths, living room and dining/kitchen equipped with furnishings, stove and refrigerator. Visiting researchers are to provide their own bed and bath linens.

The seasonal camper has a maximum sleeping capacity of four. It has one bedroom plus a convertible living/dining/kitchen area, to accommodate two additional sleepers. The unit is equipped with a shower/bath, stove and refrigerator. Visiting researchers are to provided their own bed and bath linens.

Office, laboratory, greenhouse and irrigated field plots are available to resident and visiting technical personnel. Graduate students may participate in the program.

The Center receives water from the Navajo Agricultural Products Industry (NAPI). Total irrigation for NAPI comprises about fifty percent of the 150,000 acres of irrigated land in San Juan County. Future development will expand NAPI to over 100,000 acres. Irrigated acreage in San Juan County is increasing and when all projects being planned and completed, acreage will climb from 150,000 to approximately 240,000 acres.